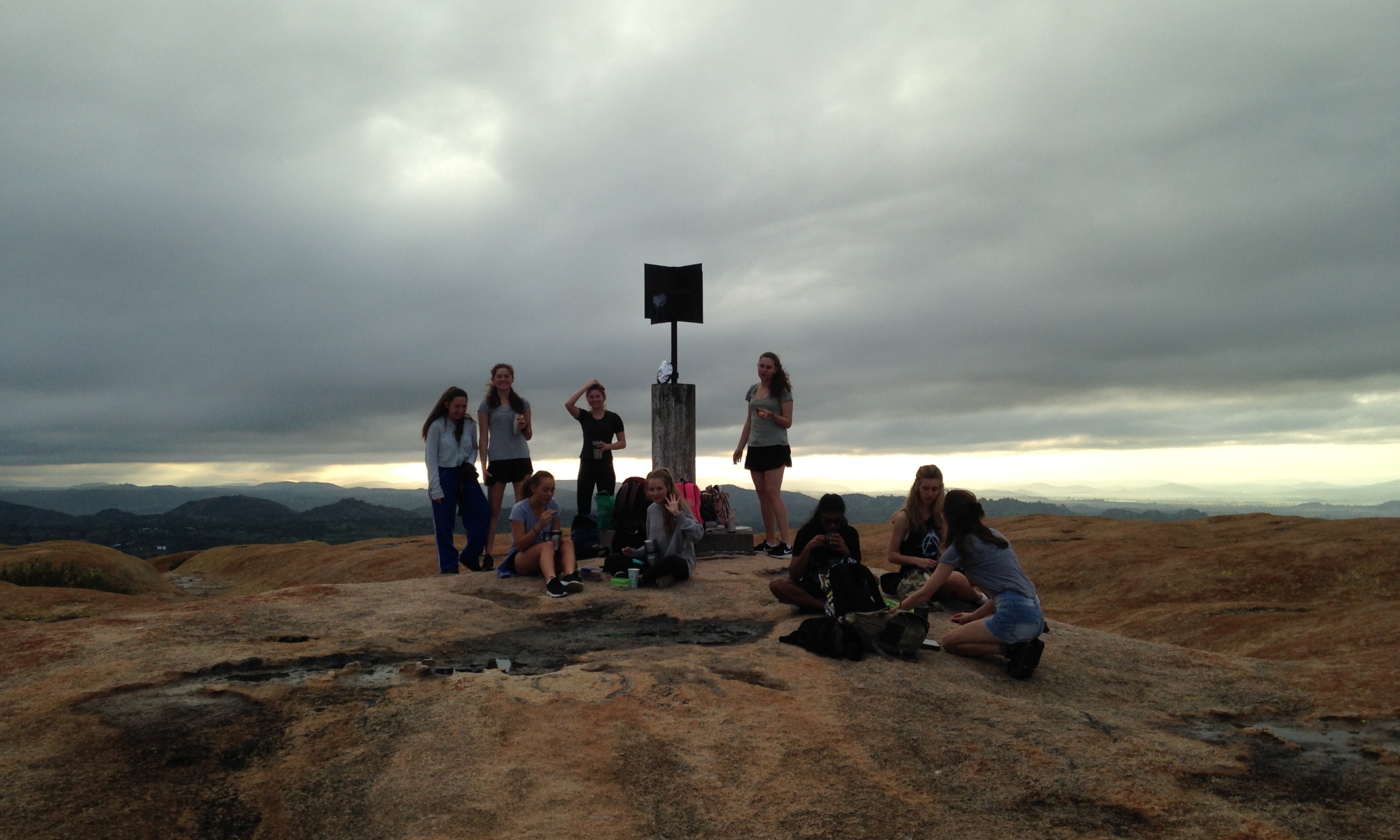 I’d rather have a goddam horse.  A horse is at least human, for God’s sake.  ~J.D. Salinger, The Catcher in the Rye

The Vagrants on a drawing (Coffee and Rusks) trip to Domboshava one January, long ago..

I needed to note the story of the horse. And the Vagrants.

It behoves me to commit it to pixels before the various elements of data are lost in the inevitable journey toward entropy, as some have done already.

The Vagrants were a wonderful group of young women and man who deserved a mention. They were kind, caring (except for not making Leah tea), generous and funny – all admirable qualities, it must be said, and they will always remain as such in my mind. This then, is a post remembering them and their idiosyncrasies, and a chance to elucidate the tail of the horse:

Ultimately, it’s a shot into the wilderness of their existence to see how their future predictions are panning out according to their own schedule, created some time back, which I have furnished them with below for their convenience.

It is the case that in all classes, certain trends and fashions come and go, and Vagrants were no exception. Not in order, and for varying periods of time, we had:

The Astronomical, Astrological and Lunar (Loony) Obsession (quite persistent): 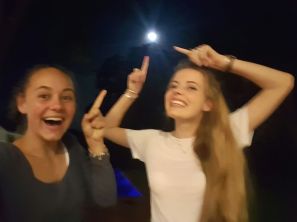 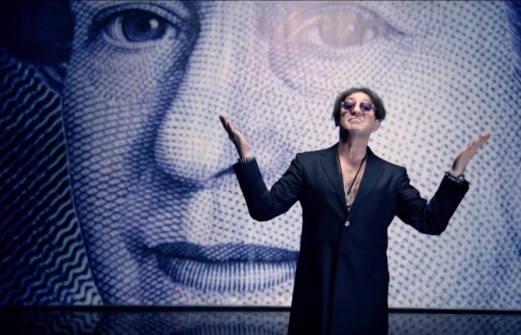 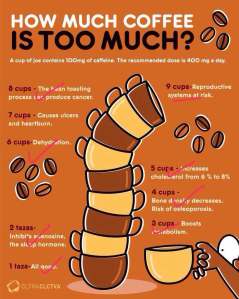 The idea of the (a particular, or any) horse arose and persisted. And persisted. And persisted some more. Retrospectively, I believe it started with Leah’s IG coursework, based on said beast (specifically), and my continual imploring her to bring the animal to school, to “draw from first-hand s(h)ources”. It became an endless trope, unpacked often, whenever, wherever. Images pounded our phones, littered the studio (still do) and were etched into almost every lesson. Equestrian activity, apparently, is ubiquitous. Once consciousness has been raised in this regard, it is possible to note said interest in galleries, adverts, music videos, public art, private art, memes and media. Literally everywhere.

It seemed inevitable that we would one day incorporate the animal into the class, and we held on to that possibility indefinitely. Until this day: 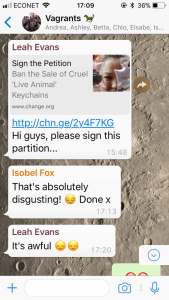 List of Things Not to Say to a Horse-Lover and Owner:

Mentally, having reminded myself once again to think before unpacking bad-taste jokes, I moved on (in fact, I did what damage control I could, found some pertinent texts from The Prophet which I sent through to minimise the harm; forsooth, it was a terrible thing and I was feeling v. bad about it – the keyring and my joke). The horse-owner, Leah was herself lucky to remain in the group – we tried to delete her (not out of shame – that was later), I wrote her a poem, in time described as a “paucity attempt”. Christiaan did leave, I wrote him a poem too, which was received with greater enthusiasm.

Life moved on: Lisa and Natalie went to Bulawayo, pulled their tongues. Sophie created the first never-to-dry ink painting. Elsabe, Isobel and Betta went to Kariba, mixed it up with Lundun. Betta did better, went to London, found a horse. Leah covered her friend in flour. Ashleigh jumped in on the horse story with the Lundun crew (in collared shirt). Chloe tied up her boyfriend for an exam for a few days. Andrea went to Mauritius and took a picture of a snake:

Which leads me to the horse. There are some phrases which ring alarm bells; evoke a premonition of dark times ahead. “Sir, you’d better come see this…” is one, and it was with significant trepidation at the end of a very stressful year that I heard those words. There is, it seems, an inexhaustible list of possibilities one would rather not encounter on a school morning. What follows is a pictorial account of one of the most surprising and finest moments in any school, one on which my initials found themselves a real horses arse:

I told you that they were a caring bunch. Indeed when I was discharged from the oncology ward forever, they were wonderfully happy on my behalf, tapped into their previous astrological obsession to create a groovy card that remains treasured in my collection.

We furnished Esther with a heart

And then they departed, leaving me with  a magnificent chair, another wonderful card and a photograph of them (Long ago, it must be…).

Although they have now moved on, and artistic endeavour only touches a few of them, it is well worth showing you some of their exceptional work – the Final Outcomes of their A2 Coursework. 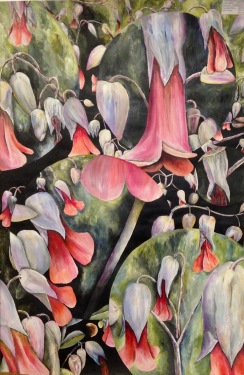 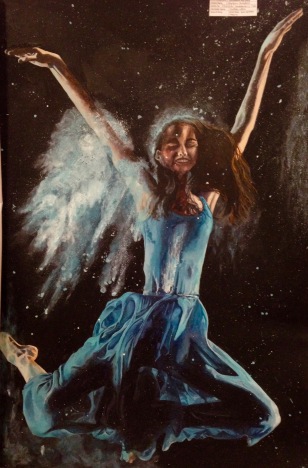 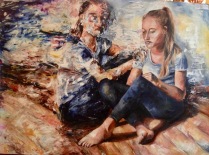 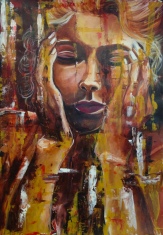 I trust, wherever they are, irrespective of whether they have checked off any of their possible futures, they’re galloping around, “neighing and shit”.

Sunday will bring to a close about thirty-five hours of exams and give way to about an equal number of marking (for each of us) over the next two weeks. Challenging drawing topics for the Ones were met with some positive responses. The Threes were well prepared for their first long exam, but the verdict is still out for the Fours. The Whey and Barbarians Unleashed enjoyed Fifteen hour exams. Stress, tiredness and an absence of music characterised the occasion. Good work was evident.

2 Replies to “Of Vagrants and Horses: Musings about the Departed”