In places like universities, where everyone talks too rationally, it is necessary for a kind of enchanter to appear. 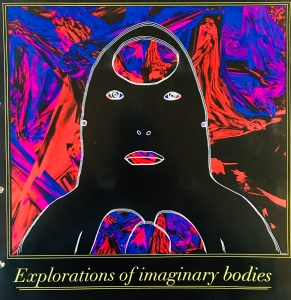 I had the pleasure of working with Luc at IGCSE Level (I wrote about his work previously). He is creative, sensitive and of gentle wit, overwhelmingly evident in the work below, and, as I have become accustomed to, a creator of tragicomic forms which reveal deep and penetrating  reflections, overlaid with a darkish tint. I lost him to Studio Three for his Advanced Level work through the actions of The Great Timetable Machine, where he worked with my colleague Mary-Ann. Our “crits”, exam and assessment marking are shared, and our Upper VI pupils are required to present their work to us half way through the year. When we met at that mid-point, his presentation which took the form of  hundreds of thoughts, sketches, digital explorations, drawings and paintings was startling. Out of that seeming chaos, a tremendous digital work emerged. It may also valid to say that because of that seeming chaos, and the overwhelming outpouring of creativity, this work has emerged.

IWe (even the title is exceptional), a 240 second work plays out over three sections. It is, I suggest, a journey with isolation, homelessness, alienation, disconnection and loss at its core (happy thoughts indeed). The following are my own thoughts about the work, not necessarily those presented by Luc.

The work opens with a genesis, in which an embryonic form of both natural and unnatural nature, a pronounced spine along its length, pulsates in a deep space. In binary, object and void hang together whilst the spectator awaits the establishment of context, achieved through the assault of kaleidoscopic imagery in a harsh rendering of a possible world. Elements of humanoid matter collide with disturbed natural imagery and techno graphics in sync with random noises, gradually speeding up until the seeming chaos takes on a regular, patterned musical form. It is not comfortable, indeed, it heightens to an almost intolerable form until the viewer is abruptly relieved of their distress.

I found this section of the work harder to respond to, yet I admire its value. I find the visual elements disparate, unaesthetic – harsh, even and random. There seems to be little narrative and I find little in which to attach meaning, apart from the fact, of course, that meaning resides in each of the statements I just made. Which is clearly the point.

The second section of the work is the core in which the primary meaning resides, and it is achieved through a subtle and mesmerising manner. Two beings similar in nature inhabit a vast, cosmically inspired space. Their textures are fleshy, palpable, tactile. Though they are faceless, their attitude is one of a tender, mutual apprehension. The drawing is so crafted that they seem to respond to each other in harmony and even desire. Lit by a strong central source, deep shadows accentuate sinewy necks which support their “heads” but which fails to cast shadows and adds to the tension within the sequence. The absence of cast shadows is curious, rendering the figures somewhat isolated from the backdrop, contained in the mutual dance.

It is clear from the work that considerable thought has gone in to the nature of these beings. Luc’s description of the concept is extensive: “I tried to give [the sequence] a distinct look that felt both familiar and alien. I wanted to mimc the appearance of the systems in the body; something that feels alive although it serves a function…” Within the preparatory work, a clear effort is visible to render the figures human-like yet abstract. It is this deliberate search for “familiar yet alien” that makes the objects relatable, their substance, movement and demeanour seems our own make-up.

This is a story about, desire, the need for connection and ultimately, the understanding that this is not achievable. Through the zooming-in sequence, the spectator is drawn ever closer to the macro level of the beings as they reach out for contact with each other. They become aware that not only are these beings fleshy organic, relatable, but more significantly, that no-matter how close they become, no-matter the detail, depth and texture of the very tissue of these beings, a membrane remains. There is contact, but there will be no ultimate connection, no understanding. They are seemingly determined to remains separate, isolated in a desperate state of disconnection.

And there is one final blow; ultimately, there is a break-down at cellular level – it seems that this meeting point is indeed a possibility – there can be union. But is is abruptly shattered and in a sharp, short withdrawing, each figure is reduced to its relative isolation. Possibility is rendered as tragedy.

The final  final section brings little relief; the work resolves in a manner that not only underlines the alienation of the individual, but also reveals significant trauma. It is then, not a work that leaves one full of overwhelming joy, rather one that posits a notion of human existence as one of lonely, deep suffering – an idea suggested for millennia. Through the colour and nature of the image, there is a reference to the genesis scene and the potential that was suggested at that point. Separation is quickly reintroduced through the reintroduction of the techno style imagery, this time with figurative elements. The hands that scratch at the now humanoid form have no means of interaction with the figure. The world is removed, alien separated both visually and metaphorically.

We are taken within the figure where recognisable forms, a spine, a blood cell seem to collide with interference from the outside, but somehow to not reconcile with the separation portrayed thus far. The soundtrack, carefully planned offers some relief and there is a tranquility about the ending, despite the traumatic journey that has taken place. Amidst this relative calm, I have thought hard about the expression on the now disembodied figure’s face. Resignation, peace, tolerance are all readable in this moment.

I find this work somewhat extraordinary. There are multiple influences and referents ranging from a wide variety of sources, which is perhaps what adds to the richness. It is at once retro and contemporary, and a credit to its maker.

Perhaps unsurprisingly, it comes with a

Form Ones are working through Allied Arts topics, much time has been spent outside drawing trees with pencil, and next week we will be exploring iPad drawing. The Threes press on with exam prep but their week has been alarmingly bereft of homework. The Fours build their IG Coursework, music has been amicably shared between the table factions. Cake remains a contentious issue within The Whey, with things reaching a frightening peak this afternoon. I believe that the volumes of work required are beginning to sink in to Barbarians Unleashed, hopefully spurring them on to great things.

2 Replies to “Homelessness, (dis)Connection and Loss. Or, An Extraordinary Student Work (II)”