A Tribute to My Father 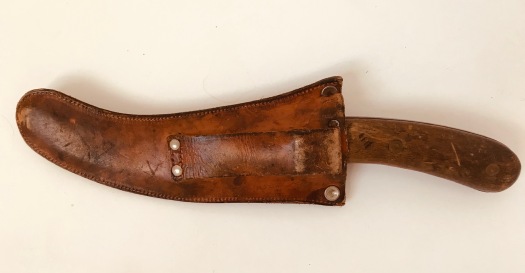 I have a specialist knife that belonged to my father. It is a sort of flattened “S” shape, with a handle at one end and the blade on the inside curve of the other, like a sickle. It has no sharp point, just a rounded, curved, protected end. It is held by a broad, curved sheath with no clips, so that it can be quickly and easily used.

It is a Fireman’s knife, and its job is clear. You can imagine it being used to cut a person’s belt, for example, but without inflicting any other damage to any part. It is a sharp, indispensable tool, there when you need it the most, and it does no harm. In my mind, it is symbolic of my dad.

He was there when you needed him, he was sharp, quick witted, reliable, protective, and he did no harm. It seems to me that if you can go through your life doing no harm, that is a very good place to begin. He was kind, generous with what he had, considerate of people and always willing to give his time to assist wherever there was a need. He was without malice, patient, slow to anger and above all, a man who loved and strived for peace around him.

As you might have guessed, he was at one point in his life, a Fireman. Perhaps one of the most noble of professions, with the potential for the literal sacrifice of the self, for the sake of others. I think it was a principle that guided my father in relation to his family. He did not pursue his own interests at the cost of us, indeed, he went through his life with the good of his family motivating his actions, with mum at the pinnacle.

He was a man of gentle, albeit slightly off-kilter humour and unusual skills. He could blow pipe-smoke into ant holes and make it appear elsewhere in the garden. He could solve complex puzzles, both physical and cerebral and could balance a teacup and saucer onto the firm mound of his belly. In later years he became a skilful photographer and somehow, from a very non-alcoholic background, he learnt enough about whisky to run the “tastings”, convincingly, and with great mirth.

He was a master driver, demonstrating this through avoiding collisions on more than one occasion (a necessary skill for this part of the world). The pinnacle of this talent was perhaps the fleeing from a herd of very-angry elephants. The blinding display of expertise saw my father reverse a Zebra Van down a windy, tree-lined dirt road at considerable speed until, to the relief of the panicked family we had successfully fled from the wall of charging beasts. It remains an act of heroism that has imprinted my mind, forever.

As much as he loved his family, mum was the centre of his world. His loyalty to her was beyond description, we all knew that. He would have followed her to the end of the world, but it was to Scotland that they travelled where they rebuilt their life. As long as he was with mum, he had the world.

The man I found conducting whisky tastings at the lodge (with maximal enjoyment by myself, the patrons and seemingly my father) was not the same man I remembered leaving Zimbabwe. He had been renewed by Scotland and her people and I am forever grateful to that country and community for this. But I do not forget that it was this brutal and beautiful country Zimbabwe that forged the man that he was and know that these are two sides of the same coin. The qualities so  prominent in dad, honesty, integrity, peacefulness and intolerance of wrong, are those I will search for in myself, and hope to have inherited.

I will be forever proud of you, and proud to be your son.

2 Replies to “The Fireman’s Knife”

Of Vagrants and Horses: Musings about the Departed

“There’s Room for You”, Or An Extraordinary Student Work (III)