“The absurd, with its rupture of rationality-of conventional ways of seeing the world-is in fact an accurate and a productive way of understanding the world.” 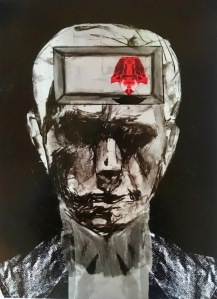 There’s Room for You is the A2 Coursework submission of Isabella Ross, a pupil I have admired from across my studio for six years – I have never taught her, she has tracked a course through our department under the tutelage of my esteemed colleagues). One of her great strengths as an art pupil was the ability to make powerful, expressive marks in a variety of media. Because these were never pulled from the air, but generally referents to objects and physical anchors of her experience in her world, they have carried significant power into which she has invested her concepts and elements of her humanity with sincere conviction. This post is not really an analysis of her coursework, rather an overview of her extraordinary work, for it deserves to be acknowledged.

The following text is the starting point to her submission:

“There’s Room For You – Enlist Today” developed and encapsulates the main them and direction of my coursework. It was a poster produced by the Parliamentary Recruiting Committee with the aim of recruiting men to the British Military during World War One. This is an unusually decorative poster, most produced before were text based, and of limited colour… . I found the slogan disturbing, especially considering the massive loss of life in those years. I became interested in continuing this idea, questioning it in both a historic and current context. As I began to think about this, the fact that there really was in the end only room for men in the ground, I was shocked to realise how indifferent I had become to the [announcement?] of death tolls from disaster and human conflict, that those that had died were people with lives and feeling. The constant bombardment of these “numbers” seems have made the modern audience immune to its distasteful and catastrophic nature. A distance has been created that I wished to cross back over and reconnect, the break back through the anonymity of mass loss of life.” (IR, Coursework Supporting Work Page 4).

As expressed previously, the interaction with our pupils crosses studio boundaries. Crits, assessments and exam marking are done with three teachers for a number of reasons. This process allows us good knowledge of all of the pupils in the department, especially at the senior level. I followed Isabella’s decision (under the guidance of Mary-Ann) to confine her outstandingly expressive, tactile qualities within traditional media to the sterility of the digital arena with, I must confess, a modicum of apprehension.

However, within her preparation work, she describes how she came to conceive of her Final Outcome as a “moving painting”. Whilst technically, this could be any video work or animated piece, it transpired that within her specific conception, she was able to retain her expressive strengths, indeed, the work is just as her conception; a moving painting / drawing which retains the vitality of her mark and various media. In fact, it is this characteristic which gives it its unusual and individual strength.

The images immediately below are details from her sketchbook, they reveal the depth of her research and careful analysis of ideas, as well as the hand of a pupil highly proficient and confident in visual exploration (each image can be expanded from the slide show for closer viewing).

The manner in which she combines various themes, and ideas into a coherent work is commendable. The vast array of references, from arcade games to Kentridge and Lieros are absorbing and require a few readings of the work to digest. Her work touches on archetypical themes, such as sacrifice and humanity at the mercy of forces beyond its control. Authority figures take on both religious and quasi-religious forms which combine to suggest elements of control beyond the  protagonist, and by inference, the spectator. Her use of masks find elements of both individuality and universality, which she suggests “display concerns of anonymity and human collective, becoming the dissolution of people from the meaning of life”.

The depth of her research is clear within the supporting work presented immediately below. These are A1 sheets of work onto which the wide variety of imagery and research have been presented (each image can be expanded for closer analysis).

The work is presented as an arcade game in which the player becomes just another number as he  journeys through the trauma and violence of a world beyond his control. He is fully at the mercy of numerous forces with little, indeed zero independent agency within his life, or the period encapsulated in this work. Isabella presents a wealth of thought provoking imagery, carefully combined into a highly unusual work, and a submission that I am proud to have associated with the department!

The Ones continue with their trees, now investigating them within digital media – age appropriate catastrophes apply. The Threes progress with exam prep, extensive giggling and a failure for most to submit their work characterised the week. Pretty pleased with the Fours IGCSE prep this week – I think it behoves me to name them. Cake Wars subsided in The Whey this week – there was a temporary, non-forceful incarceration which resolved somewhat amicably. Barbarians Unleashed seem to have been a little sensitive – I don’t really think it’s me – must be the proximity of Exams on the horizon.

4 Replies to ““There’s Room for You”, Or An Extraordinary Student Work (III)”

Of Vagrants and Horses: Musings about the Departed

“There’s Room for You”, Or An Extraordinary Student Work (III)