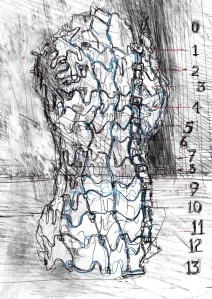 This is a wire dressmaker’s dummy. Difficult to portray, possibly hard to make out from the study. A simultaneously complex and simple object; very distinctive. Perhaps it is familiar to some, had I drawn it in colour, it would be instantly recognized by many who went through the studio of the extraordinary painter, Helen Lieros.

I left school one month prior to turning 16. I was as mature as your average individual male of that age (so mentally, about 10 years old). I had no intention of ever returning, a prospect which was surely as appealing to the administrators and teachers of my school, as it was to me. Through sheer disinterest, I had maintained a spectacularly average standard in every subject. Though I had taken the Woodwork subject choice, I had written O’ Level Art. I was a reasonably able draughtsman, and by default, settled on a career of Graphic Design (“default” in this case meaning I had absolutely no other options).
Perhaps through sheer goodwill, I was accepted into the Harare Polytechnic Graphic Art and Design programme. This was a superb course, with legendary lecturers, many who have taught some of the finest artists of every field in this country, and many of prestige beyond these borders.

It took approximately 90 days before I was asked to leave.
(I shall not overdo the drama at this juncture. In this country, policies are often malleable, and once again by sheer goodwill, or in truth, by virtue of one who had accompanied my exit, and his particular relations, I was once again re-instated. I did eventually mature, and did graduate well, and had the privilege of learning from some of the most extraordinary teachers I have ever encountered. But that has nothing to do with this drawing.)

Thus, now 16, sans-education, sans-career options, sans-life ambition, I found my way to the studio of artist and teacher Helen Lieros. This was unequivocally a turning point. It is through sheer luck and good fortune that an individual encounters a teacher or mentor that can make a fundamental change, or influence or impact one’s life. It is a rare occurrence that some of us are privileged to experience, as I did at this time.

In this studio we drew. And drew, and drew and drew. And we painted, and some of us matured. Amidst us, were those who had burnt out all conventional options and gathered there, and fed off the extraordinary rich, deep environment. Some of us were nurtured, as I was, and found some purpose. We gained strength form the energy of the studio, from each other, and from the driving force at the centre, that was the artist, Helen Lieros.
Although the studio was accessible through the entrance of the main college with which it was associated, initiates never entered there. The real entrance was via the sanitary lane, past the refuse, employees car park, the quarters of the cleaning staff, and through the small door, which was located around the corner of a mural clad alleyway.
The studio was an abandoned kitchen, of institutional variety. At one end a cold room, with a shoulder thick door acted as an auxiliary store room. There was a curious L shape enclave at each end; the West end space housed a small etching press (only the elite amongst us ever touched it), and at the Eastern side the kettle, tea, single plate stove, on which we cooked our beans, and from which the patrons of the artists received their “Greek” coffee, brewed by the sure hand of our mentor.
Although there were some larger windows at the Western end, there was no view to speak of. Along the side of the room was a bank of ovens, now strange, dark cupboard like features and a countertop which carried the collection of extraordinary items and objects that had been hoarded for numerous years.
Amidst these objects was this dressmaker’s dummy. Now that I have mentioned the context, I know that there are many who now know this figure. It appeared often in still lives, in surrealistic paintings. It was a constant, a default symbol, versatile in possible iconographic expressions. It was embedded in our minds.
That studio closed in about 1993. It signified the end of an era. The end of an extraordinary creative streak that ran through some Harare secondary school and pre-university art students, those who would never enter formal education, and those so would return and contribute to the energy of that place.
In 2012, in a radically different period of life, I stood as the Head of Art and the Hellenic Academy, opening the fist exhibition of the new art studios, “Blueprint”. It goes without saying that my mentor, Helen was present. Without that history, this present would not exist. She had with her a parcel, newsprint wrapped, large, lightweight, a present for me.
As you have surely surmised, it was the wonderful figure of the dressmaker’s dummy. Figure from my chequered history, old friend long past, somehow ever-present.
I have no idea how many times I have drawn that figure; in how many paintings it has appeared. It is not easy to portray, it does not lend itself to visual expression. Nevertheless, it remains for me a symbol, a thread from what now appears as childhood, from my early explorations of visual arts, of a world outside of conventions, a world just a little bit toward the edge.
Today our A level students began their examination. It pleases me that my students were in the presence of that figure. They have no concept of its significance to me, nor, I suspect, would they find any aesthetic or conceptual value in that object.
But I like to think there is some continuity, whether it is possible to note or deduce actual consequences or not.
It shall remain to me, a curious, significant object.

2 Replies to “An exploration of a curious, significant object, and a slice of personal history…”