“The idea is to write it so that people hear it and it slides through the brain and goes straight to the heart.” 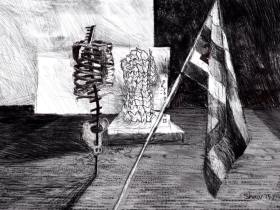 These two images are born of different eras: The first, “Walking in the Dark”, a mono-print on Japanese tissue, is from 2007, a time (if you are Zimbabwean) I need say little about. It hangs in my office (it is in high company; gifts, highly personal in nature and a small collection of of artworks comprising primarily students’ works. Given, hand-picked (stolen?), each of the most extraordinary quality).

My students are bemused by my print: “Sir, how can you just colour a piece of paper black and call it walking in the dark?” (lol, SMH, wtf. etc.).

The tendency, because it is my work, is to laugh with them and move on.

An artwork is inextricably linked to its context. I think, in 2007, that must have been apprehended by viewers of my print series; five of the seven images were sold. I am also confident that there was sufficient artistry in their production. The lines were sharp and clear, expressive, strong tones and textures were apparent within a solid composition. They were (though I say myself) very well executed and fine exemplars of the medium. I am happy that the works stood as alone as images; indeed, one hangs in my office.

But there are a failings revealed through the telling of the story:

This is what must be grappled with if one is to work in the abstract. I am of more and more the view, that it seems (with regard to the wisdom of Maya Angelou above) that the slide through the brain, is a very necessary part of art-making, and that abstract visual elements alone, more commonly seem to circumnavigate that organ.

With this in mind, (7 years and a considerable number of works later) I produced the second of the images above for “From Line to Form”, a selections of Graphics, for the 2015 Delta exhibition. The contexts are different, but there are a number of shared characteristics. A stillness, the proverbial “calm before a storm”, an air of futility, a stretching, reaching the limit of resources, perhaps even an air of desperation.

I have been working more figuratively in recent years (in one branch of my work). In the manner of the most esteemed artists, Picasso, Hockney, et. al., I took on the idea of the artist and his models, what better way to locate oneself within a context? The dressmaker’s dummy, mentioned previously, the intriguing ‘Steel Skeleton’ of my student A. du Plessis, and the flag. Yes, symbol unsaid, “second version”.

I hope that within the breathless air, the not quite logically rendered perspective and amidst my models, some observation of our context is and hopefully, some artistic sensibility prevails.

i. The best mono-prints are made with: a very soft pencil, sharpened to a needle-like point; the softest paper one can find, thin, too. Leesa Swart gave me the Japanese tissue I mention above; hardboard (masonite), instead of glass, provides a more natural feel to the work.

ii. I have stood within the “Rothko Room” at the Tate, and been rendered almost breathless by his works; Abstract, in the extreme.

iii. I have been very pleased with the prints made on the “wall-paper”, (semi-gloss, with a glue finish on the back) by Lighthouse Print. It will be better in future if I export the drawings to Coral Draw, and allow a margin around the drawing.

iv. 20,000+ people, is the figure most commonly cited as having been made redundant since the Supreme Court ruling of 17 July 2015.